Tom Haward’s oyster firm (Richard Haward’s Oysters) has been in his family for eight generations, going back 300 years. He says that he has been “lucky” that his oyster beds have not been impacted by sewage dumping so far. But Tom is worried about the “immediate threat” that these discharges by water companies pose to his business and marine life around Mersea Island, if they are allowed to continue.

Good Law Project is a not for profit campaign organisation that uses the law for a better world.

We know that the law, in the right hands, can be a fair and decent force for good. It is a practical tool for positive change and can make amazing things happen.

Stay up to date and be the first to hear about how to take action.

Good Law Project is a not for profit campaign organisation that uses the law for a better world.

We know that the law, in the right hands, can be a fair and decent force for good. It is a practical tool for positive change and can make amazing things happen.

He described the predicament being faced by his business in simple and stark terms, “We won’t be able to catch oysters from the sea if it is heavily contaminated. We will be stopped from harvesting because it is a danger to human health”.

Good Law Project is now supporting Richard Haward’s Oysters, alongside Marine Conservation Society and surfer and activist, Hugo Tagholm, in a legal challenge to stop water companies polluting our shorelines. You can support this challenge here.

In the lead-up to the launch of our claim, Tom Haward took us out on his boat to catch oysters, as we asked him why he is taking legal action.

The conditions were surprisingly good for oyster farming for the end of November – if you don’t count the biting cold. With the blue skies and tranquil waters, you would be forgiven for forgetting that Richard Haward’s Oysters has very recently had to weather the consecutive storms of Brexit and the pandemic, only to now face the existential threat of sewage dumping.

On the water, we passed other fishing boats and trawlers, including one owned by Tom’s cousin. It was a reminder that Tom is not only taking legal action for the sake of his own business, but for all of Mersea’s oyster-farmers and the wider industry which forms the backbone of the local economy. 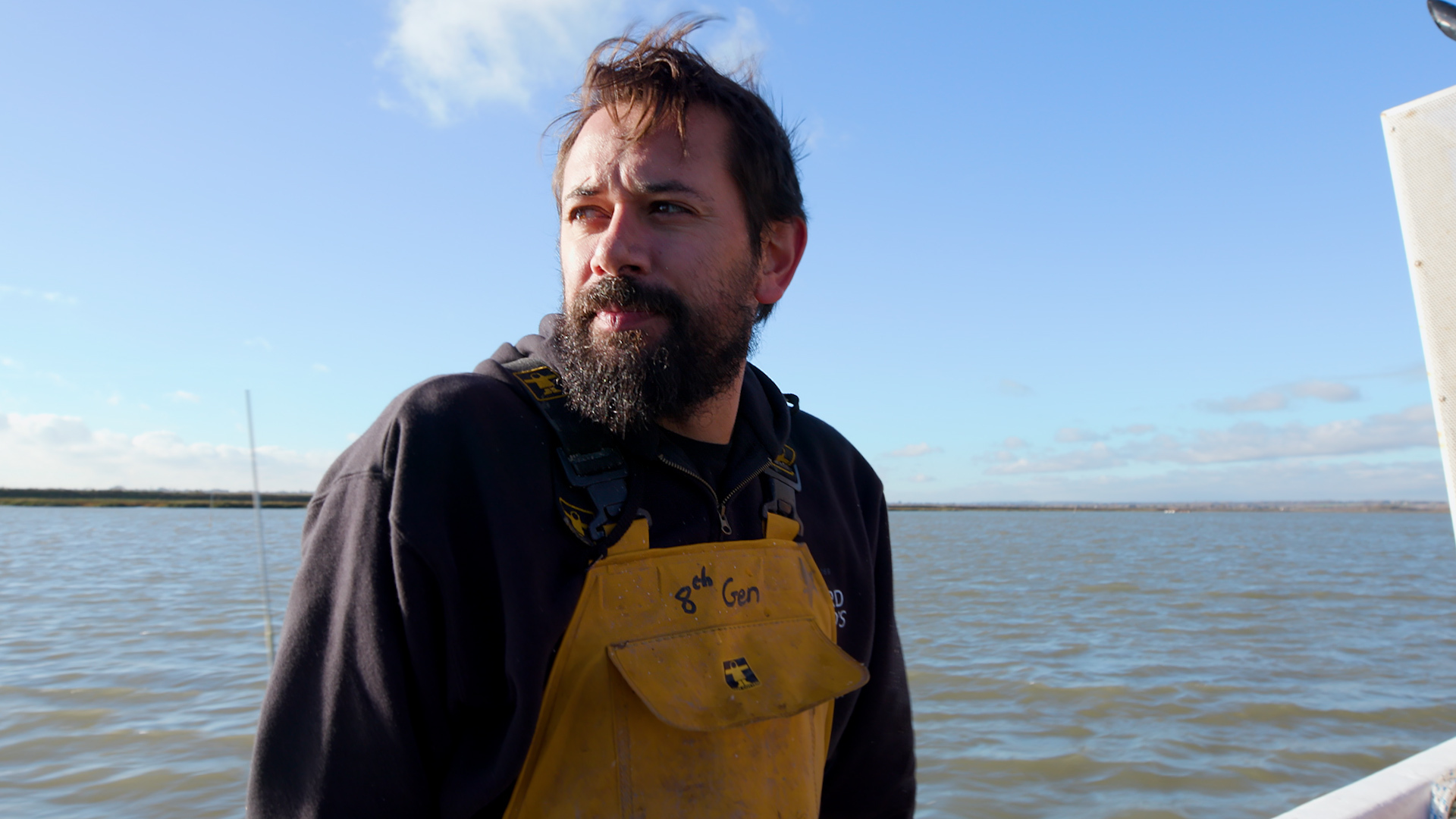 Just before sunset, Tom took us to the pristine West Mersea beach, lined with pastel coloured huts. But this picturesque scene was harshly disrupted by a long and ugly looking storm overflow pipe stretching along the beach and far out into the waves. It is a worrying and ominous sight when you consider how popular the beach is and how many children will be playing in its proximity during the summer months.

These storm overflows are designed to stop sewers from becoming overwhelmed by discharging sewage into our rivers, waterways and shorelines. Storm overflows should only be used in an emergency, such as in the wake of exceptionally heavy rainfall, but water companies are using them with alarming regularity.

Last year alone, storm overflows discharged untreated sewage 372,533 times into English waters, over a period of 2.7 million hours – according to figures from the Environment Agency.

In August, the Government published a Storm Overflows Discharge Reduction Plan, which gives water firms until 2050 to invest in and improve sewers to prevent them from overflowing into English waterways and coastlines.

But Tom Haward told us that the 2050 target is too late to protect his industry, “considering how raw sewage can absolutely devastate the environment so quickly”. If urgent action isn’t taken, Tom fears that his family business might be closed off completely to his young daughter if she chooses to go into the industry in the future.

We believe that the Government’s plan is not just unfit for purpose, but unlawful. Through the courts, we want to compel the Government to rewrite its plan to expand protections for our coastal waters and significantly bring forward the deadlines for water companies to act.

Good Law Project recently forced the Government to go back to the drawing board on its threadbare Net Zero strategy. With this case, we hope to make the Government concede again. But we need your help.

Please join us in our campaign to protect our coastlines, rivers and waterways for generations to come by supporting this challenge.

This article is part of our Clean Waters case

A deluge of untreated sewage is being discharged by water companies into our rivers and along our coastlines. But the Government is failing to face up to the scale of the problem. This is why we have launched legal action alongside Marine Conservation Society, Richard Haward’s Oysters and surfer and activist, Hugo Tagholm, to demand action.

See more about this case

Stay up to date and be the first to hear about how to take action.

Got a tip off?

As well as our own research, Good Law Project relies on people like you to let us know when there’s an issue that needs our attention.

We use cookies where necessary to allow us to understand how people interact with our website and content, so that we can continue to improve our service.

We only ever receive anonymous information, and cannot track you across other websites.